One of the ways we can fully realize the potential of quantum computers is by basing them on both light and matter – this way, information can be stored and processed, but also travel at the speed of light.

Scientists have just taken a step closer to this goal, by successfully producing the largest hybrid particles of light and matter ever created.

These quasiparticles, known as Rydberg polaritons, were made with the help of a piece of stone containing cuprous oxide (Cu2O) crystals from an ancient deposit in Namibia, one of the few places in the world where cuprous oxide has been found in gemstone quality.

The crystal retrieved from the stone was polished and thinned to less than the width of a human hair and sandwiched between two mirrors to trap light, resulting in Rydberg polaritons 100 times larger than any previously seen.

This achievement brings us closer to producing a quantum simulator that can run off these Rydberg polaritons, using quantum bits or qubits to store information in 0s, 1s, and multiple values in between – rather than just the 1s and 0s of classical computing bits. 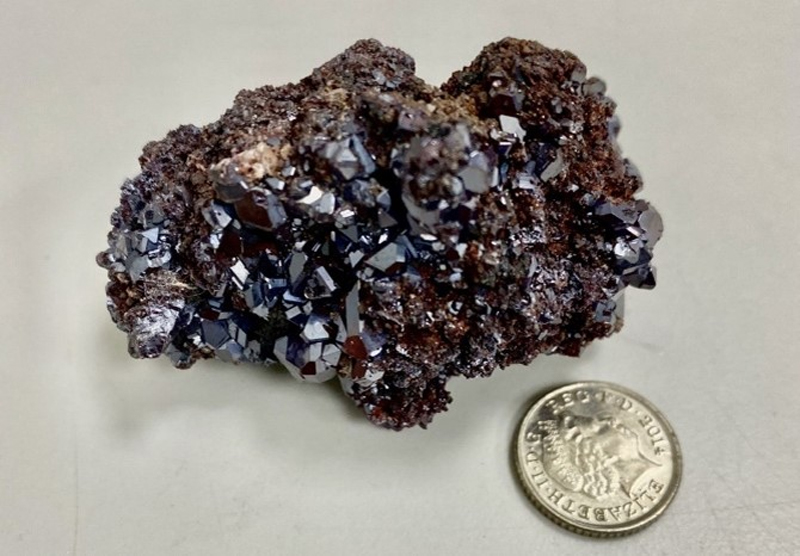 “Making a quantum simulator with light is the holy grail of science,” says physicist Hamid Ohadi, from the University of St Andrews in the UK.

“We have taken a huge leap towards this by creating Rydberg polaritons, the key ingredient of it.”

What makes Rydberg polaritons so special is that they switch continually from light to matter and back again. The researchers compare the light and matter to two sides of the same coin, and it’s the matter side where polaritons can interact with each other.

This is important, because light particles move quickly, but don’t interact with each other. Matter is slower, but it is able to interact. Putting these two abilities together could help to unlock the potential of quantum computers.

This flexibility is crucial in managing quantum states that remain undefined until they’re observed. A fully functioning quantum computer built on this technology remains some way off, but we’re now closer than ever before to being able to put one together.

Rydberg polaritons are formed through the coupling of excitons and photons. This is where the ancient gemstone from Namibia came in: Cuprous oxide is a useful and cheap semiconductor – and previous research had shown that it contained giant Rydberg excitons.

Excitons are electrically neutral quasiparticles that can be forced, under the right conditions, to couple with light particles. These large excitons found in cuprous oxide are able to be coupled with photons within a special set-up known as a Fabry–Pérot microcavity – essentially a mirror sandwich.

This was a key element in being able to create the larger Rydberg polaritons.

“Purchasing the stone on eBay was easy,” says physicist Sai Kiran Rajendran, from the University of St Andrews. “The challenge was to make Rydberg polaritons that exist in an extremely narrow color range.”

Once fully capable quantum computers can be put together – perhaps using these Rydberg polaritons – the exponential improvements in computing power will enable them to tackle hugely complex calculations beyond the scope of the computers we have today.

Examples put forward by the researchers include the development of high-temperature superconducting materials, and understanding more about how proteins fold (potentially increasing our ability to produce drug treatments).

The methods outlined in the new research will need to be refined further in order for these particles to be used in quantum circuits, but the basics are now there – and the team thinks their results can be improved upon in the future too.

“These results pave the way towards realizing strongly interacting exciton–polaritons and exploring strongly correlated phases of matter using light on a chip,” write the researchers in their paper.

The research has been published in Nature Materials.