How Does Quantum Computing Work and What Is It?

Quantum computing is a subclass of advanced computing that focuses on creating technologies based on quantum theory notions. Subatomic particles like photons, electrons, atoms, and ions, as well as their spin and state information, are employed as bits in this computer system. While traditional computers utilize binary bits, which can only be 1 or 0, Quantum bits, also known as qubits, are used in quantum computing, which can be 1, 0, or both at the same time. As a result, quantum computing has improved and now has the potential to process huge volumes of data. It also allows for faster and more efficient data analysis.

The Operating Concept of a Quantum Computer is as follows:

In comparison to the computers, we are accustomed to, which I will refer to as classical computers from now on, quantum computers handle problems differently.

Due to their capacity to be in a large number of states at the same time, quantum computers offer significant benefits over conventional computers for specific tasks. In contrast, classical computers can only be in one state at a time.

If you want to grasp how a quantum computer works, you must first comprehend three concepts: superposition, entanglement, and interference.

Now first of all let’s understand superposition, entanglement, and interference:

When we measure a bit, we simply receive back the state in which the bit is now located; but, as we shall see, this is not the case with qubits. The concept of a qubit is more complicated; however, to make a useful visual representation of them, imagine them as an arrow pointing in three-dimensional space; if they point upwards, they are in zero states; if they point downwards, they are in the one state; however, they also have the option to be in what is known as a superposition state, which is when the arrow points in any direction. In this superposition state, zero and one are combined to form a state of zero and one.

In a traditional computer, the bits are completely independent of one another. There is no correlation between the state of one bit and the state of any of the other bits. However, in quantum computers, the qubits may get entangled with one another, which implies that they form part of a single big quantum state as a result of their interaction.

Consider two qubits that are in distinct superposition states but have not yet begun to entangle; you can see the probabilities adjacent to them, which are completely independent of one another at this point. However, once they are entangled, we must discard those independent probabilities and construct a probability distribution of all the conceivable states we may obtain out of either 00, 01, 10, or 11.

It is possible to construct a quantum computer with n qubits from a mixture of 2n states, in general.

Examine the block sphere shown in the next image; a qubit does not truly look like this; this is just a very effective means of visualizing the current state of a qubit. The state of a qubit is represented by the letter Q. Real-world quantum bits are characterized by the state of a quantum wave function, which is a more abstract object than a qubit itself. In quantum physics, wavefunctions are the basic mathematical descriptions of everything that happens.

When you have a large number of qubits entangled together, the wavefunctions of all of the qubits are summed together to form an overall wavefunction that describes the state of the quantum computer, as seen in figure-. Adding wavefunctions together is called interference because, much as with ripples in water, when we put waves together, they may either constructively interfere and combine to form a larger wave or destructively interfere and cancel each other out. In a quantum computer, the entire wavefunction is what determines the varied probability of different states, and by altering the states of individual qubits, we may alter the likelihood that different states will emerge when we measure the quantum computer.

Always keep in mind that, although a quantum computer may be in a superposition of millions of states at once when we measure it, we only receive a single state out of it. As a result, while utilizing a quantum computer to solve a computing issue, you must utilize constructive interference to enhance the likelihood of getting the right answer and destructive interference to reduce the probability of getting a tan erroneous response. That way, when we measure it, we will get the proper response.

Beginning with the first concept of a quantum computer in 1980 and continuing today, the quantum computing industry has experienced tremendous growth, especially over the past decade. Dozens of corporations and start-ups have invested hundreds of millions of dollars in a race to build the world’s best quantum computers. 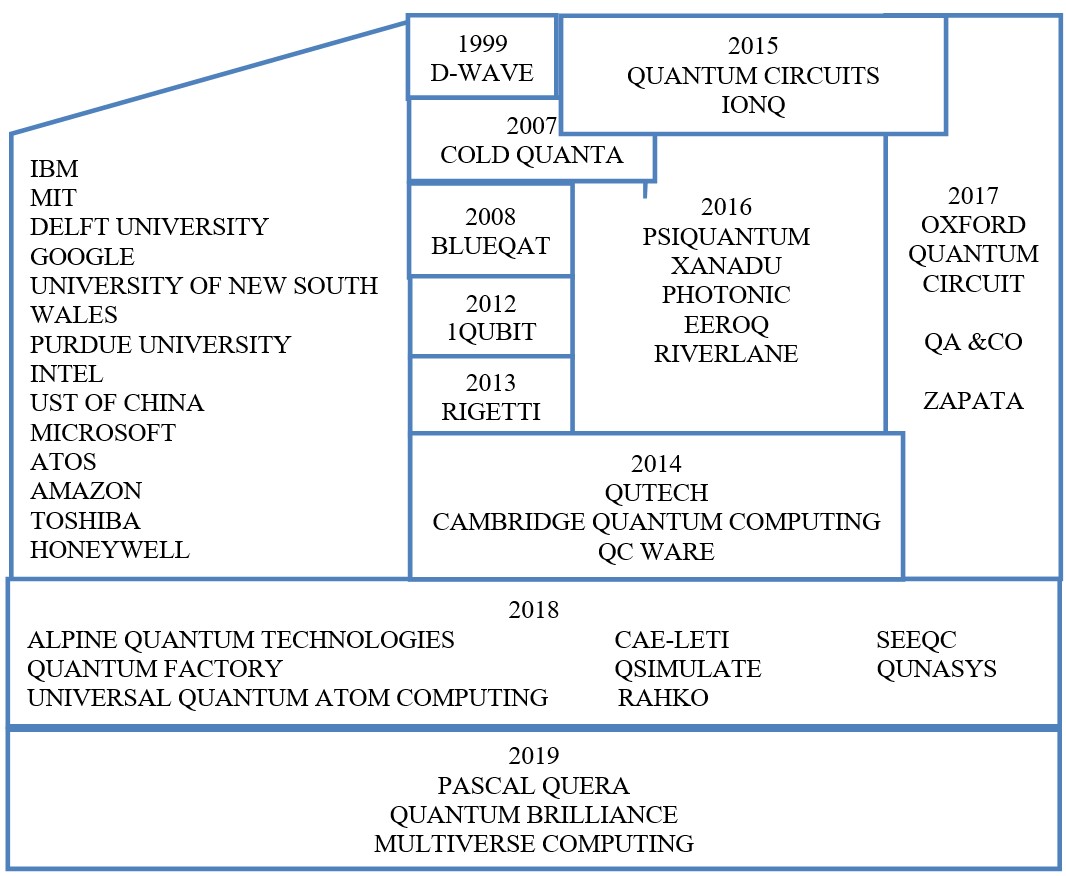 Google wants to invest a few billion dollars to build a quantum PC by 2029 that can execute a large range of commercial and logical operations without errors, according to Hartmut Neven, a well-known Google researcher who oversees the organization’s Quantum AI initiative. According to him, the group just inaugurated a large California-built grounds centered on the work.

“We are at this juncture,” stated Dr. Neven, who has been researching quantum registration at Google since 2006. “We now have all of the necessary components nearby to ensure our safety. We understand how to carry out the instructions.”

“Quantum processing addresses a major shift because it addresses the features of quantum physics and gives us the best chance of understanding the regular world,” Mr. Pichai remarked during the virtual event.

The initiative will engage 60 researchers as well as understudies and understudies to work at the Hartree Center in Daresbury, Cheshire, with the help of IBM Research and the UK’s Science and Technology Facilities Council (STFC). According to IBM, the recently established Hartree National Center for Digital Innovation (HNCDI) will “apply AI, superior execution registering (HPC) and information investigation, quantum processing, and cloud advances” to propel research in areas such as materials improvement and natural manageability.

Microsoft Corp.’s M12 investment arm and many other significant financial backers have bet $215 million on PsiQuantum Corp., a firm that expects to build a 1,000,000 qubit photonic quantum PC within a few years.

Bloomberg was the first to report on the rumor today. PsiQuantum is now one of the most well-funded young enterprises in the quantum registering biological system.

Based in Palo Alto, California PsiQuantum is a quantum computer that uses photons as qubits. An approach differs in general from the executions of the field’s current driving players. Honeywell International Inc.’s quantum PC, which the company claims will be the fastest on the earth soon, uses captured particles as qubits, whereas Google LLC’s Sycamore relies on superconducting circuits.

Amazon.com Inc. is creating the groundwork for a quantum computer, continuing efforts to install technologies that can break down enormous amounts of data in seconds that even the most powerful supercomputers take hours or days to analyze.

According to internal job advertisements and LinkedIn data, Amazon has been recruiting for a Quantum Hardware Team inside its Amazon Web Services Center for Quantum Computing. Marc Runyan, a former designer with NASA’s Jet Propulsion Laboratory, lists his position as senior quantum research researcher at Amazon and describes his role as “assisting with the designing and construction of a quantum PC for Amazon Web Services.”

Among Amazon’s latest hires are researchers focused on developing a new superconducting quantum device as well as manufacturing it. Developing its quantum PC would allow Amazon to more closely mirror the methods used by its major cloud rivals. Worldwide Business Machines Corp. initially made a quantum computer available to the general public in 2016 and has since undergone regular redesigns.

Honeywell will invest up to $300 million in the yet-to-be-named firm, with the possibility to seek outside financial backing. When the agreement is completed, there will be a couple of quantum organizations for financial supporters because IonQ will soon be public through a unique reason securing partnership (SPAC) deal. Honeywell has made a significant investment in quantum computing in the last couple of years, to expand the current application of the technology.

The following are some of the most important applications that we may see once the next generation of computers is widely available.

Artificial intelligence is the primary application of quantum computing (AI). As we all know, AI is based on the idea of a computer program learning from its experiences and increasing its accuracy as more information is supplied until it demonstrates “intelligence.” For quantum processing, artificial intelligence is a fantastic alternative.
Precision modeling of molecular interactions is another example, which is used to find the best configurations for chemical processes. We know that modern “quantum chemistry” is exceedingly complicated and that today’s digital computers can only examine the simplest substances.

Because chemical processes produce highly entangled quantum superposition states, they are quantum in nature. Fully matured quantum computers, on the other hand, can evaluate even the most complicated operations.

The difficulty of factoring large numbers into primes now underpins the majority of internet security. While this may now be done with digital computers by looking through all possible elements, a large amount of time required makes “cracking the code” costly and impracticable. Because quantum computers are far more powerful at factoring than digital computers, such security measures will soon be obsolete.

Modern markets are among the most complicated systems ever devised by man. While we’ve developed more scientific and mathematical tools to deal with it, it’s still fundamentally different from other scientific areas in one important way: there’s no controlled setting in which to perform testing.
Another benefit of quantum computing is that financial operations like arbitrage may need a huge number of path-dependent steps, which quickly exceeds the capabilities of a digital computer.

Quantum computers might help us construct more accurate climate models, giving us a better understanding of how people affect the environment. These models serve as the foundation for our estimates of future warming, as well as assisting us in evaluating what urgent measures must be done to avoid disasters.
Particle Physics is a branch of physics that deals with the study of particles.